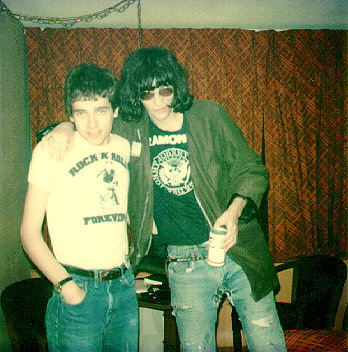 This doesn't have much to do with Secret Cinema, at least not directly, but like a lot of people I was feeling sad about the passing of Joey Ramone -- and I thought I would share this photo. It's me (age 20) and Joey circa April, 1978, the same night that The Ramones played a concert at the Tower Theater (along with The Runaways and The Jam...a great night).

I don't mean to pretend that Joey and me were ever good friends or even acquaintances, or to think that he had any memory whatsoever of meeting me. I have the picture because I was assigned to interview the band, back when I was a dabbling rock journalist and photographer. The interview was for Philadelphia's not-fondly remembered Happytimes magazine, and I also took photos of the show.

It was the worst and most awkward interview I ever did, the blame being entirely mine. While I was a fan of the band, I didn't have much in the way of questions prepared, and when Joey went through my list of ill-conceived queries with about 10 minutes worth of two-word answers, I didn't have much to say. In retrospect, he was very patient with me.

Anyway, the best thing about that experience was...I got this photograph, courtesy of the cleverness of their manager Danny Fields, who carried around a Polaroid SX-70 camera with him to provide instant souvenirs to the press. Thanks Danny. And thanks, Joey.